Justin is an out of work actor who turns to porn as a means to pay the bills. Strung out on drugs and struggling to get by, he gets involved with some shady characters who offer him a huge payday to star in one of their special productions. Destiny is a struggling actress who will do anything to make it big. She’s waited tables, danced and even escorted while paying her way waiting for her big break to come along. When some men approach her offering her a big break, she is quick to take it without asking enough questions. What will happen when Justin’s and Destiny’s lives collide behind the scenes on the set of a Snuff Film?

Sometimes it’s just a question of time, until two different people, which do not have any similarities but the same "profession" will meet up.
And, as you know, you always meet twice.

While Justin sinks deeper and deeper in his own hell, in Destiny grows an unsuspected will to survive…

…and she finds the gate to her individual hell.

Snuff Film reminds a little of Lee’s The Pig: out of merciless Splatterpunk grows an unexpected different end, which changes into classic horror – good job!
The excessive violence is only slightly behind Miller’s brilliant work: Hell, Texas.
But Snuff Film is not a stupid carnage (as Lee likes to be accused of), but actually a study; the story of a psychological barbarization: from the tormented self-concept through the cognitive dissonance to a perverted super-ego…
Freud goes Splatterpunk – nothing more to ask for!

Tim Miller: a synonym for extreme horror. A synonym for Splatterpunk! For me, Miller has to be named with Lee or White in the same breath. Millers writing-style knows how to give the reader a closeness, that you will need a short breather from time to time.
Miller burns, cuts, tortures the pictures nearly into the eyes of the reader – let you taste the blood of the victim with every breath – Splatterpunk at its best!

Miller’s style is characterized by a sometimes frightening self-evidentness. You’re going through a story – a report: he lets his characters live, without experience them directly (like White does), he confronts with the most brutal violence, without letting it go arbitrary (like you’ll find often with Lee).
He creates a content-based meta-level for the reader, a black bastion. You remain as a silent observer in a merciless proximity.

About the book itself I have to say, that Tim should work at the text-formatting: because of the huge line-spacing he spends a lot of space. If the end of a chapter doesn’t fill the page complettly, it’s centered – unusual, but not bad.
At the end of the book you’ll find a short comment from Tim and a preview to his new book: Cassie kills. Why the hell there are eight empty pages at the end – I don’t know.
The cover hasn’t really to do with the content of the book, but I guess it’s more likely a message (and to be serious: Millers cover-artwork is generally strange…) 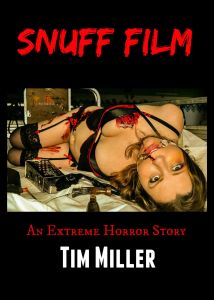