There was no warning. No chance to escape. They came suddenly. Naked. Bloodthirsty. Sadistic. They descended upon the Pine Village Apartment Complex, relentlessly torturing and killing anyone they could find.

Fearing for their lives, the residents of the complex must band together. A young trans woman, a suicidal middle-aged writer, a lonely Vietnam vet, a newlywed couple, an elderly widow, a single mother and her son, two on-the-run criminals and the serial killer known as The Exit. Eleven strangers. The only thing they have in common is the unstoppable horde that wants to kill them. If they are to make it through the night, they must fight back.

Basically it does not always need something new, something never seen before or something witty. Sometimes the known may be repeated, or better: reinterpreted.
So Brian Keene has made (wrote) less of an innovation with The Complex, but an interpretation – and this he did extremely innovative!

The story is as easy as resourceful – and therefore endlessly adaptable: a group of people, demented humans, zombies, psychos, possessed whatever – you just don’t know – attacks a complex with only one goal: MURDER!
Keene takes care for eleven (actually 14) fates, residents of this house:

– Terri and Caleb:
a single parent mother with her son;

– Shaggy and Turo:
two criminals on the run;

Later there are also

– Mike:
who’s actually for a date in the hood

– Bryan:
who was on the way to the airport.

Eleven characters, living together for a long time, but never found to each other – until today…

You can see Keene’s experience in The Complex: he knows how to control the tempo all the time and always precisely dose it, does not lose his-self in excessive violence, but also does not spare it; and especially: he lets grow the characters without bore for a second – he spends the information you need, for the imagination you have!

Instead a stupid horror-thriller, Keene has hidden the content between the lines – not with the intention to be searched, but to be found!
He shows the daily social brutalization of our society with this apartment-house – the anonymity, that rises above the unknown to strangeness. At the same time, he finally plays with the actual insignificance of the individual past. Just as at the beginning he lets the characters flourish, emphasize and embellish their individuality, he finally makes it clear that they are destinies, people, individuals just as oneself; the socially imposed servitude of the classification loses its meaning.

Keene is King on cocaine – I don’t wanna say , that Keene crosses a border, but interprets it only differently: he expresses what King describes.

The Complex: Yannick Dahans & Benjamins Rochers "The Horde" (La Horde/2009) meets Gareth Evans’ "The Raid" (Serbuan maut/2011) and is finally tasted with John Carpenters "Assault on Precinct 13" – an infernal horror thriller with a splendid 80s charm, which extends the reader even after the last line!

…and just by the way: the cover is absolutely ingenious! 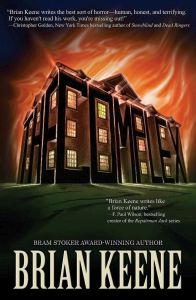