A lone farmer, chosen by God to test the boundaries of sin, is isolated in a darkened cave with only a candle, quill and parchment. His burden is to awaken each day within a predetermined encounter with one of the seven deadly sins and their associated demons.
The following are his translated entries.

When I think of horror, one name eats mercilessly through my brain: Howard Phillips Lovecraft.
This incredible genius, who welcomed the darkness, somewhere in the cognitive desert of the self. He, who knew the dead paths the darkness crawled…

So, what has that to do with K. Trap Jones The Sinner?
Very simple: that’s how I imagine the evening community at Lovecrafts table!

Less alone, but actually abandoned, not surrendered to the self, but, not less mercilessly, presented, you’re rotting in joyful horror.

The Sinner tells the story of a farmer, who experiences the seven deadly sins – wrath, greed, sloth, gluttony, lust, envy and pride – and afterwards has the opportunity to write down this experience in a foreign language; to forget it soon.
These lines here are the translations of these records.

I’ve never experienced a similar work before, I’ve never been allowed to meet such a horror – unfortunately!
Jones writes, although the initial comparison with Lovecraft, not a lovecraftian horror, but a rectified reflection, which harbors its repugnance in the cognition of the known.

Stylistically The Sinner is dual ingenious:
on the one hand in a purely stylistic structure. Here Jones creates with each paragraph individual meta-levels, which together forms a whole and simultaneously only a part.
On the other hand, Jones has written the deadly sins not only as individual chapters but as individual novels, which, like pale remembrances, nourish the mind, until the self-chosen damnation presents their smirking grimace.

With every chapter one begins to find anew in an understanding, which spreading its wings in a silent confession to the end… to fall!

The end overlaps, devours, dethrones, reincarnates and consciously perceives – it is simply nameless – …and Jones pronounces HIM!

Unusual and surprising, The Sinner actually reads like a novel, sneaks into the mind with this masquerade, to reveal itself there – to be the newborn old man in whose tears the last smile gnaws itself.

And with every effort to escape, you move only further into the own endurability.

K. Trap Jones has not written a horror novel here – he has inflame the purgatory!

… and rarely it burned colder. 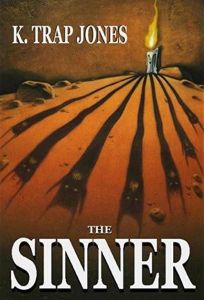