When you are within my walls, I am God.

I have always been here and I will always be. I have complete dominion.
I control what you see, what you feel, and how you think. I will bend reality to whatever I wish. I will show you your worst fears and make you indulge in your darkest desires.

Your pain is my pleasure.
Your tears are my ambrosia.
Your despair is my joy.

I will break you.

I will ruin you.

Once you enter me, there is no escape. I will own you, forever.

… and then there are these little surprises.

The story itself is not new: a group of people in a house, which’s haunted by something.
The interpretation, on the other hand, is not only new, but simply ingenious: Cook writes from the perspective of the house, the mind, the obsession, the omnipresence – which attracts the reader and pushes him off, schmooze and estrange; but never lets escape.

So A God of hungry Walls is far from simply being read by the way or only halfhearted. It almost demands attention, rightly claims the tribute of concentration, literally wants to communicate, show and report.

Within a short time, you has transformed yourself into a paradox: the nothingness in being – subsist in the absence of existence; the deaf listener, the dumb speaker, the blind observer.
You have not entered the house, but the realm; actually you have not entered it, but have been admitted and finally you aren’t here at all, you’re only a reader – you’re only… faithful.

A God of hungry Walls defines itself in the beginning, to lose itself in the end in this self-definition – it is actually less like a novel, whose end is already established from the beginning, but as an arbitrary development, whose progress and ultimate end becomes a fate-dependent finale; to an indeterminacy, that is quite conscious of the impossibility of this circumstance … but just ignores that fact!

What begins as a diffuse autonomy, grows steadily further into the own reality, until it winds around the reader as a self-sufficient now and snows him in deceptive familiarity. It resembles a silent doubt, which, like a last act, seeks proximity as a scheming memory.

Cook has created a diffuse reflection of the possibility, which, never obscene and less perverse than abstract, causes fiction to be a fact, which soon grows to truth.

He created with A God of hungry Walls a creation whose existence can not exist in the traditional sense, but does not bend to this conventionality and thus doesn’t give the reader the meta-level of experience, but makes him become it.

A truly evil mixture of seductive poetry, repulsive splatterpunk, and lascivious obscenity – you trust, to get abandoned, are abandoned to be caught, are caught to be pushed away, are pushed away to be welcomed and give trust, whose end begins before its source… to get abandoned…

The end ultimately doesn’t solve, as it finally devours, doesn’t overwhelm the mind, just doesn’t involve it anymore and defies itself in eternal torments … and begins, although it has never ended.

A God of hungry Walls is a painting, whose color slowly dissolves to give the origin a face – strange, as weird familiar.

The walls are asleep and I know their silence, the daydream dispossess by their caws.
In it I’m listening to the decay, that let me taste in my tears the bitter rust of yesterday.

God’s not dead – She never lived!
And hungers quietly for my greed. 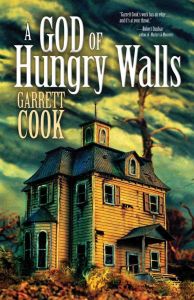