Home truths pave the way for a journey of self-discovery and revenge in the direct sequel to Matt Shaw’s Sick Bastards.

In principle, if you’re reading a sequel, it’s recommended to have been read the previous book – at Matt Shaw’s SickER B*stards is even a must!
Here I can’t and won’t speak of a sequel (in the classical sense), but of a second part! Indeed a sequel continues the story, it also has an autonomy. A "part", on the other hand, belongs to something, is a piece of it, so it is interdependent and interacts with the other part – just like in the case of SickER B*stards.
Strictly speaking, SickER B*stards even goes a step further and provides the link between Sick B*stards and SickEST B*stards, but this does not belong here.

SickER B*stards welcomes the reader directly in the "family" – father, mother, sister and brother. But this time John knows about himself, his true life and being – or at least what he was once upon a time…

John continues the game, but now less as an actor, but as a director. The cameras no longer make his life a playground, but he feeds the world with his will!
What was a desperate escape in the first part, becomes a sick obsession in the second part! You experience the change of the obscenity of the first part to the primitiveness of finality. In a way you can speak here of a struggle between reality (the actual world outside the experiment, John now knows about) and existence (the "Here" and "Now" of life, in which John becomes the "brother".

The journey, which seemed to be finished in the first part, now shows its end as the beginning – the beginning of the demise. Shaw created here an escalating conflict, which, as an essence, bleeds the pure delusion.
What was previously a grotesque celebration, is now the pure dedication to decay!

Matt Shaw closed the circle with SickER B*stards. Where he let the reader experience a constant abstraction of self-disclosure in Sick B*stards, he concretizes the selection of morbidity in SickER B*stards – and releases it! 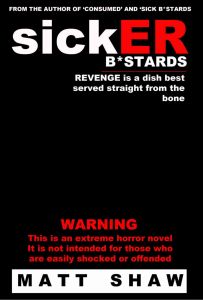