SickEST B*stards continues from the end of SickER B*stards. To understand this short story, and wrap the events of Sick B*stards up, you need to have read the previous two titles.

When it’s time to call something a small stroke of genius?
For SickEST B*stards you might almost be tempted to choose these words.

Shaw changes the perspective from John to his "mother" (so finally not his mother, but "Kelly Dethlefs")! And that’s what makes the thing so awesome, as ultimately disgusting.
Finally you’ll find yourself in the first part (Sick B*stards) again:
this abhorrent devotion, which appears to be the only way through the assumed finality.

SickEST B*stards seamlessly follows SickER B*stards and makes the nightmare incarnate to a final reality. The reader is no longer confronted (Sick B*stards), no longer attacked (SickER B*stards)… actually he’ll get ignored; it does not need any more active action – we are lost!

The will to survive as the absolution of knowledge – knowledge as a metamorphosis to delusion.

Just as Matt Shaw has closed the circle with SickER B*stards, he has filled it with SickEST B*stards – to the signum of resignation. 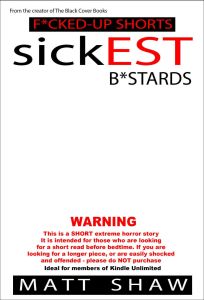