SICK
If the bombs dropped…
If life as we know stopped…
If everything went to hell…
How far would you go to survive?

SICKEST
Nothing will ever be the same again in the horrifying conclusion to the Sick B*stards trilogie.

The increase suggests it: these three books simply belong together! And so I can only recommend to everyone to buy the book of the same name, Sick. Sicker. Sickest. The Bastard Collection, in which all three parts were united.
Ultimately, Matt Shaw has created a three-part Coming-of-Age-Novel as a degenerate life-cycle:

The first part, Sick B*stards, is a prelude, that is closed in itself, but holds the door open to the second part SickER B*stards.

The second part, SickER B*stards, comes through this door with a morbid certainty, closes it, and retains the key – in order to enable an escape into the repulsiveness of the flagellation not until the end; the door opens for the third part, SickEST B*stards.

The third part, SickEST B*stards, less closes all doors, than opening the one gate – the gate to hell…

A three-part morbid Coming-of-Age-Novel, a Horror-Drama, a Psycho-Thriller… just sick at all. 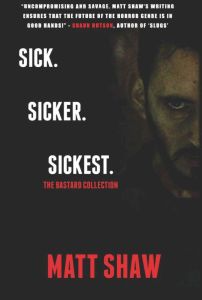