Monica J. O’Rourke – What Happens in the Darkness

Manhattan died, along with much of the country. Twelve-year-old Janelle lost her family in one horrific night and managed to escape into a no-longer-recognizable city. As she struggles for survival, she comes across something much worse than the decimated landscape, much worse than the enemy soldiers patrolling the streets night and day. Another force has been unleashed, one hell-bent on destroying the invading enemy—but now that they’re out, there’s no turning back.

Extremes…
There are a lot and especially related to Monica J. O’Rourke the subject is very appropriate. But also related to her book What Happens in the Darkness!

So much may be betrayed: it is a vampire-horror-(and so much more)-novel – so, who basically believes to have a problem with vampires …
… just keep on reading anyway, because what Monica J. O’Rourke wrote with What Happens in the Darkness makes some opinions on vampires to reconsider!
I just told you: "extremes" (especially in relation to O’Rourke)

So we have the one extreme: these glittering euro-vampires with kind of transsexual charisma … not here…!
The other extreme: bloodthirsty, bullet-proof Ueber-creatures with choleric seizures … once again: not here…
Well … and the third extreme: Monica J. O’Rourke – and she’s gonna run here straight in your face!

I know (and love) O’Rourke as a splatterpunk author, who is able to express the feminine side without getting to a whiny dramaturgy. Thinking for a splatterpunk-novel, and not at least cause of the title of the book and its blurb, I began to read What Happens in the Darkness.
What I found, didn’t measure up to my expectations – but gave me a completely new image of O’Rourke – and believe me: she got me again!

Janelle, a twelve-year-old girl, fights her way through a shattered Manhattan.
The Global Dominion, a federation of different states, has launched the final attack on America. Soldiers patrol through the streets and bring death.

On an army-base, Jeff makes a momentous decision: for many years, Martin and his entourage are held there – vampires.

At first glance, it may sound very dripping-patriotic and sometimes cheesy: the world against America! The last hope, the enemy himself – here as vampires …

Contrary to the supposed platitudes, however, you’ll find a rigorous horror-drama about what darkness hides.
Patriotism, which is shown here not as a dramaturgical nationality, but a normal bond to the roots, is used here only as a necessary stylistic device. Monica J. O’Rourke certainly knows the difference between a patriotism owed to the war and a dramaturgical national-style, as it’s often comes from Hollywood.
Reminder: we’re talking about Monica J. "Little Terror-Queen" O’Rourke and not a weepy-whiny-director in his midlife-crisis!

What Happens in the Darkness lives from its greatest criticism: the drabness!
You have to know, that you’ll find here more (not just!) a regular novel, than a blood-smeared horror-novel!
O’Rourke doesn’t play with incredible pictures, doesn’t disguise with extraordinary possibilities and doesn’t surprise with neo-dramatic changes – she confronts the reader with a relentless reality: dry and colorless. And this colorlessness makes What Happens in the Darkness so oppressive – so… real.

What she simply can, is to extend the relationship-aspect in a distinctive way – sometimes to maltreat, sometimes to schmooze; but definitely always to excite!

She provides this insane, into madness driving, hopelessness, this urge, this unconditional need for normality, for conventionality, to survive somehow.
The end won’t be spectacular, won’t be ripe and colorful; it will be quiet and merciless – it will be dark and O’Rourke knows what is happening in this darkness.

What Happens in the Darkness is not a musical about metrosexual pale-skins, crying as depressive microchiroptera for their yesterday, but a post-apocalyptic horror-drama, that donates the dream of darkness in the coat of dystopia. 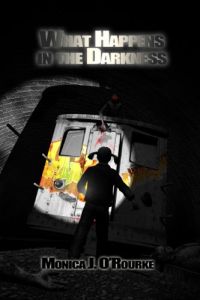