HOLY SHIT!
THIS IS THE BEST BOOK EVER!!!

It’s kind of like that awesome movie, Frozen, you know where there’s those people stuck on a ski-lift while surrounded by wolves. But imagine if instead of wolves they were bears. And the bears spit wolves! Like they’re fucking grenade launchers or something! It’s awesome!!!

And then there’s these gigantic death worms that come out of the ground and kill and eat everyone. And they’re HUGE. Big enough to eat breweries and shit. And it’s all because of 2012! I KNOW! But, don’t worry, there’s a bunch of Mexican Ninjas with invisibility ponchos and throwing-sombreros that are going to save the day. They are so badass. And the main character Dave does some stuff, too. He can pull things out of the air, like burgers and Armani suits. (If I could do that I’d be eating McDouble cheeseburgers constantly!) He and his friend Worm-Head Girl, along with the Mexican Ninjas, and a veterinarian named LeAnn must try to save Phoenix from total annihilation. But they better hurry up because these gigantic death worms are going to utterly fucking destroy everything in like two seconds!!

CHECK OUT THE MOST AWESOME BOOK YOU COULD EVER POSSIBLY IMAGINE!!
IT’S THE BEST BOOK EVER!!!

Finally this could be the whole review: yeah!

I mean, seriously: bizarro is a very special genre. Even I’m not a friend of this black-and-white thinking, I have to admit, that bizarro-fiction is pretty close to that. Either you like it or not.
Well, what ever – I like it!
But Vince Kramer now really breaks all the borders: black or white; you love him or can’t do anything with his books!
Well, I’m one of these people loving him! And with Kramer, that’s not just black or white, but anything between purple and yellow…

The story itself finally is told by the blurb: a small group (three persons to be exact: Dave, Mike and Suzanne) stuck on a ski-lift, getting attacked by wolf-spitting bears, rescued by mexican Ninjas, so they can fight against gigantic death worms…

…everything crushing, all eating, all killing gigantic death worms!

Vince Kramer has a very special kind of humor – and here’s really only black or white: either you like this kind of bizarr humor or you just can’t handle it!
This is about uninhibited meaninglessness, immersed so deeply in a pool of chaotic-bizarre idiocy, that the drowning already mutates into a reincarnation of unbridled mental mash in the form of gigantic death worms!

…and not to forget: Worm-Head Girl!

That’s it… somehow… or not.
Gigantic Death Worm is brain-mash with a special (really very "special") "What-the-fuck-it-is-so-fucking-awesome"-factor! 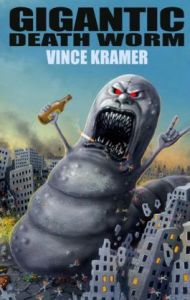