With times being hard Victoria finds herself in the world of the Adult Movie Industry where she soon carves a name for herself. The offers are flowing in, as is the money, as she becomes more and more popular amongst the producers but then she meets him…
A man with an offer she can’t refuse even if she wanted to. A man who has other ideas about how pornographic films should be filmed. A man catering for a much, much darker audience.

The blurb says more than enough about the plot, so I won’t write about the content, but go straight to the book – to that typical "Shaw-Feeling".

Hardly anyone is grottier than Shaw, when it comes to giving the reader the feeling that they have a chance to escape.

This clear thought, this obvious destiny, which less justifies, than makes it indispensable …
… this awakening after the last rebellion, the decay as an imperative last act.

In addition to the ego-perspective, that almost wring the last tear out of the action, he always switches between the times, creating a timeline of pure razor wire, the reader will be trapped in – even the smallest breath makes the reality cut deeper into the own flesh; a movement or even an escape is unthinkable! 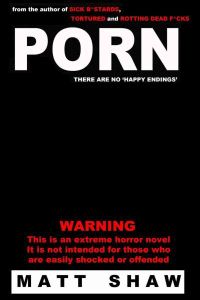