Xibalba, home of torture and sacrifice, is the kingdom of the lord of death. He stalked the night in the guise of a putrefied corpse, with the head of an owl and adorned with a necklace of disembodied eyes that hung from nerve cords. He commanded legions of shapeshifting creatures, spectral shamans, and corpses hungry for the flesh of the living. The Mayans feared him and his realm of horror. He sat atop his pyramid temple surrounded by his demon kings and demanded sacrifices of blood and beating hearts as tribute to him and his ghostly world.

These legends, along with those that lived in fear of them, have been dead and gone for centuries. Yet now, a doorway has been opened in Georgia. A group of college students seek their missing professor, a man who has secretly uncovered the answer to one of history’s greatest mysteries. However, what they find is more than the evidence of a hidden civilization. It’s also a gateway to a world of living nightmares.

Basically I’m actually not a friend of surprises (note the relativization!) – but sometimes…

Seriously, what do you expect from the "Sisters of Slaughter" (Michelle Garza and Melissa Lason)?
Exactly! – blood, intestines, violence and slaughter-orgies!

How wrong can one be…

At the beginning Mayan Blue reminds me for a good old Slasher novel: a group of (young) people, the remoteness and something evil.
Works!
It always works! A less demanding rain of blood in the evening and you can sleep more relaxed!

What comes up next may be titled almost classic horror: the clouds are closing, something supernatural crossing the border to our world…
Okay, I’m fine with that – even better than the Slasher.
Well researched horror about the Mayan-culture: sleeping will not anymore, but you have to have priorities!

We’re almost at the half of the book…

…and than it starts!

Splatter? Gore?
No…
Well, yes – there’s carnage and butchery, it flows blood and there’s a lot of hep for the the readers imagination.
And somehow it is different.

Instead of getting lost in the bloodlust, the descriptions are almost ritualistic – it’s less about the act, than the finality, less about the moment, than the consequence.
Garza and Lason are actually focusing on the Mayan-cult, instead of just using it as a good peg to hang on. Here they weave a story around a myth – in this case Xibalbá: the underworld of the Maya.

Especially the writing style of the Sisters of Slaughter is interesting- although I initially perceived it unconsciously: though they write in the third person, they actually remain as storytellers above the events, but it seems that they do not do it in their entirety, but sit on the shoulder of each protagonist – in a sense, they seem to change the perspective by creating a meta-level for each protagonist.
Hard to explain, but nice to experience…

Mayan Blue is not classic horror or Splatterpunk; at all, this novel is rather unconventional (in a positive sense) and thus sometimes already edgy.
Inevitably, this leads to the fact, that you have to engage with this book – it requires willingness of the reader, but rewards him with a little gem of the genre.

As a reader, you must show the willingness to let the story simply happens and have the will not to judge in advance.
This book takes time (even after reading!) to fully unfold – it literally seems to act still times after.
But it is exactly this time, it is exactly this process, that makes this book so unusual or even extraordinary – especially in this genre!

It should be mentioned: you could count Mayan Blue remotely to zombie-novels – I won’t like to tell too much now, which is why I leave it at that.

And to the Sisters of Slaughter:
from now on, please always such surprises – I already mentioned that I like surprises, right? 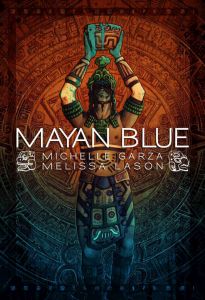