Ernie Lester is a grown man who likes to play with dolls. Except his dolls are not actually dolls. They are living, breathing women. Using drugs to paralyze them, he brings new girls into his “Family” where he bathes, feeds, and uses them to decorate his Dollhouse.

When Ernie sets his sights on Jodi, he realizes he must have her at all costs. Everything about her would be perfect for his Dollhouse. Problem is, Jodi comes with a heavy price. Will she end up as one of Ernie’s dolls? Or will Ernie finally push things too far? Find out in one of Tim Miller’s most terrifying tales to date.

Tim "The Butcher" Miller – actually a good description for this author.
But if the butcher begins to play with dolls, it gets serious…

The main-idea is as disturbing, as sad: a man considers women as puppets (due to a strong narcotic) to escape his loneliness (and because he is a little chauvinist – well… and a psychopath).
Already here it shows an unfamiliar note – Miller gives his protagonist a certain dramatic background.
Also the rest of Dollhouse is typical and untypical for Miller.
First, there is this typical character-development, which is associated with these almost more typical "Miller-Turns" and gives his books this (just typical) dirty note.
Untypical (at least at this time of his career) is the level of violence, or its frequency – for "The Butcher" a diffident, but not sugar-coated novella.

Dollhouse isn’t a blood-dripping splatterpunk novella, but rather a small psychograph of a, at least in his own eyes, (anti-)hero.
Miller plays (once again) a wonderful perfidious game, which leads the reader to feel between a sick mind and (literally) insane action, also sympathy and understanding.

Actually, Miller does everything right. Actually, he has created a (small) splatterpunk-drama, as expected from him…
…but actually you want a little more depth, a little more time and thus a little more pages.
I would never have thought of making such a comparison, but there are occasional thoughts for Edward Lee – this wink, this sometimes impish grin between the lines, you’ll find again and again – just as these nuances of Paul Cleave, whom I as a reader would’ve loved to see grow and sprout.

Even Dollhouse is the entry into Miller’s little slaughterhouse, it’s still to handle with caution. It’s quite disgusting, sick, disgusting and bloody, but more moderate, than massive.
If that is already too much, you should at least keep your fingers off Miller’s other (old) works – but if you like this work, you can confidently try his other books, in which he often goes wild a lot more and you’ll not really miss anything. 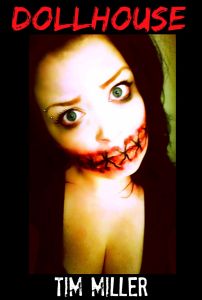