First written thirty-five years ago and completed days before the Stonewall riots in New York, Hogg is one of America’s most famous “unpublishable” novels. It recounts three horrifically violent days in 1969 in the life of truck driver and rapist-for-hire, Franklin Hargus. Narrated by his young accomplice, the novel portrays a descent into unimaginable depravity, a hell comprised of the filth and brutality civilization exists to forget. What transforms this nightmare into literature is Delany’s refusal, faced with our moral anxieties, to mutilate his appalling creation. Hogg’s monsters wear our faces, possessing the human complexities of intense loyalty, perverse admiration, and an integrity so pure that pity becomes betrayal. No reader can be prepared for such a story. It is a stunning achievement.

Less witness, than moment, than companion, than representative of omnipresence… Hogg.

It’s hard to put into words what you find here. Difficult to define, what is waiting for the reader and why you’ll confront yourself with this work at all – not to mention the possible clash of the blasphemy presented here.
Blasphemy, in form of criticism.
Criticizing this divine image, this eternal idol, who does not want to believe in itself…: Human.

It’s difficult to describe this act – to reduce it to only one operation.
Reduced to the written word, you would probably speak of a child/adolescent and the world of sexual perversion. But Delany has done so much more with Hogg!
As a reader you wade through a literary degeneration which hides under its its obviousness a depth, which is less inscrutable, than apprehensible.

Hogg is neither just content nor just interpretation – Hogg is not raw, it is alive; it is art!
Paul Klee (1879 – 1940) once said, that art doesn’t reproduce what is visible, but makes it visible – and that’s exactly what Delany did here: he made it visible – he brought it, fetched it!

The others…
The hell…

That’s what’ll you find here. That’s what’s waiting here – not to be found, but because of its undeniable presence.

He doesn’t even gets the donation of a name, nevertheless still remains – or exactly because of that(?)- less protagonist, but representative – finally "character", not as an individual, but as an entity.
This, in the progress (development) not only stylistic, but formative element, points the direction that Delany indicates with Hogg.
Down? Not at all! We’re already down there – crawling on this mucus-wetted ground not even in, but already through the ruin.
No way you could challenge, no escort, no enticement…

If you gaze long into an abyss, the abyss also gazes into you.
(Wenn du lange in einen Abgrund blickst, blickt der Abgrund auch in dich hinein.)

Delany doesn’t deprive – he denounces from the first page on: his world, his story, his time – it takes a while to notice; "He" is the abyss, blatantly staring at my innermost, because already after the first page, I have looked into it too long.

Disfranchisement… even of the values!
Immediately I understand, that I don’t see myself confronted with an incomprehensible matter-of-course, but with a godless objectivity – yes, even more: a neutrality; a sterility in which I, as a bacterium remain without existence…

Disfranchisement… even of the existence!
No values… not valuefree, total degradation!

In this case Hogg maybe is less extreme, but close; but realistic; but trivial; like pronounced what no one should talk about…

…so it might be "extreme" after all, if it would subordinate itself in a rating.

Of course it’s possible to love a human being if you don’t know them too well.

A contemporary witness of evolution: humanity.
Humanity… without dramatic commitment, no lyrical presentation but also not reduced; no, sober; factual – prosaic description. 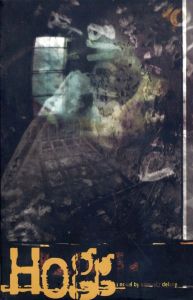