Deep in the heart of Texas sits The Country Club. At the Club, the super wealthy explore their deepest darkest fantasies and desires. Some of them are too horrific to imagine.

Crystal is a blogger who investigates Texas Urban Legends. No one believes the Club actually exists. She sets out to expose the Club and their atrocities to the world. In her search, she finds the truth is much worse than she could have ever imagined.

⚠
⚠
In this book you’ll get confronted with
explicit violence against babies!

Alright, the first facts should be cleared – time to enter The Country Club…

The Country Club is one of these books where opinions differ: either you like it, you’re in the mood for a quite "unleashed" (this trem just fits better than "unbridled") Tim Miller, or you throw the book into the next corner.
Miller presents a wild mix, you may love or can hate:
it starts as a typical Miller, with thoughts of Hostel in mind. Shortly you feel reminded of Suffer the Flesh (Monica J.O’Rourke, Wildside Press, 2002), even if I have to admit, that The Country Club doesn’t spend the same depth of the characters. Toward the end, the events turn over to a B-Movie-Action-Slasher, which suggests, with a more or less open ending, upcoming parts.

Honestly? I loooove that shit!
This is not about literary claim, but simply pure fun – this is not just to "rock" the place, but "death metal" the area (you’ll understand after reading…)!

One mistake you shouldn’t make, is to treat The Country Club as a classic, standalone novella – like I already mentioned, because that’s not what it is. Rather, it’s a (quite stable) base for the other three novellas of the "One Percent Series".

Since at least Welcome to Hell, Texas, it should be clear to everyone, that Miller is not taking prisoners. The Country Club doesn’t fundamentally top the level of violence, but one scene is scratching at the threshold: children; or to be exact: a baby.
I do not want to go into that, but I would like to emphasize it in principle: problems with violence against children/babies? Maybe better to skip a page in this one…

Especially towards the end, Miller reimburses the reader with an entertaining inferno of stereotypical ideals – even if a certain satirical note is fortunately not to be dismissed; and that’s what makes it so awesome!
I do not know many books by Miller, in which you can experience the mischievous fun, he had in writing (even with, or maybe even because, the extremely drastic violence descriptions). 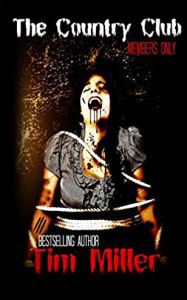