When you’re forty-five, getting di­vorced, and disil­lusioned from years of soul-sucking work in corporate America, there isn’t much to look forward to. With his personal life just as deep in the dumps as his pro­fessional life, Mike Ashbrook figures a janitorial job would be somehow fitting, but what he finds is a different kind of clean-up service.

Now Mike is wrist-deep in human waste. As a crime-scene cleaner, when the police are done, his job is just begin­ning. His biggest problem now, besides wiping up blood, guts, and other nastiness, is his new co-worker, Sage. She’s young, beau­tiful, and the only other employee who doesn’t quit after a week. She may also be totally insane. Sage is not just an enigma—she’s toxic.

Mike is a typical loser – in the mid-forties, divorced, unattractive and crime-scene-cleaner… Yeah! Crime-scene-cleaner!
Not just the absolute twerp, but a slouch who’s cleaning up the bloody muck of the Mafia – the best conditions for an extensive social- and sex-life…
But then Sage enters his life; this little sex-goddess!
And then it becomes really "toxic"…

It’s well known, that there are different ways to enjoy a book: some drink a good wine or Scotch, some listen to a beloved record, some enjoy the total silence and seclusion…

…however; Triana’s latest work doesn’t need any of that! What you need here is a bucket of water, rubbergloves, goggles and a sponge! Why? Quite simple: to be able to clean away all the blood, flesh and guts, that Triana pours over the reader’s head in the most blatant way!

Toxic Love quickly turns out to be a mobile slaughterhouse in paperback format – and rarely it has been more fun to rummage through innards!

The self-evidentness of Triana to conjure the stillbirths of vileness from the depths of obscenity is just fascinating – crossing frontiers within the limits: that’s what makes Triana so unique!
Of course he can Horror, as he impressively proved with Body Art, but he can also stay very well in the Here and Now; no supernaturalness, but unspoken reality – just think of Full Brutal (Grindhouse Press, 2018).
With Toxic Love he didn’t just continue along this path, but developed it into his highly personal highway – without any speed limits, of course!

What makes Toxic Love (once again) stand out from the crowd is the story, which, besides the inevitable crossing of frontiers (we’re talking about splatterpunk after all), also contains this typical character-development of Triana.

The frontier crossing isn’t to be found in violent excesses, which are beyond good and evil, but in the complete exhaustion of morality; Toxic Love simply catapults itself beyond all boundaries of custom and ethics.
Triana humiliates custom in its own blood, while it screams its lust into the world, degrades morality in the sweaty sheets of shamelessness, in which it lasciviously writhes, pollutes ethics with the juices of ecstasy, which it avidly soaks up…

The already mentioned character-development is one of Triana’s greatest strengths – that’s exactly what makes his stories so special: he lets his characters live and not just drown in blood.
It is precisely this character-development, that he has fully exploited in Toxic Love – not only the dialogues and actions of Mike grow, change and develop, but Triana himself, as a narrator, adapts the language to the stage of development!
He manages not to lose himself as a storyteller, as a third person, this necessary evil of the synopsis, but be a consequence, be an essential part of the protagonists. As a reader, you won’t escape to a meta-level from which you’re (just) an observer, but remain with the protagonists and almost experience this (wonderful) barbarity through his eyes!

With Toxic Love Triana has created a small character-study of an antihero rising out of the floods of blood, body fluids and bleach; a splatterpunk novella with the libido of a Wrath James White and the obscenity of an Edward Lee…

This is not just Splatterpunk, this is a Splatterspunk-Thriller-Cumming-of-Age-Novel! 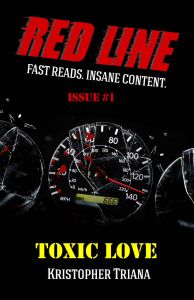