Art comes in many Forms.

The human body is a canvas, and as an undertaker, Harold considers himself an artist. His expertise is bringing the appearance of life back to the dead for their wakes. But when his ex-lovers start arriving in body bags, Harold believes he’s receiving a message to create a new masterpiece.

Attracted by all of these creations, a mysterious red dust surrounds these unique artists, bringing their worlds together.

Soon they’ll all learn that art truly does imitate life.

In 1988 Thomas Harris wrote a bestseller with his novel The Silence of the Lambs.
In 1991 the book was filmed under the direction of Jonathan Demme.
In 2016 Kristoph Triana recalls the memories of this global hits – and perverts them to a massacre as has so far rarely been experienced!

Harold is a mortician (finally a "body cosmetician") – with passion. For him it’s not just a job, but a true passion to give the dead their faces back. By the way, he is able to indulge his other "passion"…
When Harold suddenly finds his ex-lovers on his table, he believes in a sign to be followed…

And Toby and Jessica, a young couple, actually just wanna go on vacation…

Whether fate wants it or not: all these paths will meet…

Body Art is less a book, but a grotesque and eminently precisely differentiated development – a metamorphosis of evil.
From a classic (psycho-)thriller, you slide into a horror-thriller, to quickly cross the boundaries of obscenity and find yourself in a splatterpunk-orgy that carries doom – and gives birth to it! And what it gives birth, is an almost indescribable extreme-horror, which is to portray the supernaturality in its most morbid form!

In the first part, you find yourself in a self-enhancing mixture of psycho- and horror-thriller, in which Triana places a perfidious conglomerate of obscenity, perversion and amoral, like a second skin around the reader. Again and again he uses the splatterpunk – but not to shock, but to represent, not to react, but to create!
Until this point you may speak of a tribute, a homage to The Silence of the Lambs here and there – but you can feel in the abysses created, but yet not expressed by Triana, the becoming; the expansion…

In the second part, out of the perversion the anomaly is formed.
You float on an ocean of blood into the unnatural, in that which may not be! From the previously created amorphous assumption, the cold, rotten breath that surrounds the reader, arises, materializes, metamorphoses the godless, the nameless – the idolatry itself!

Really awesome – whether it’s the elements, the character-development or the pure proceeding: Triana does not increase. He merely gives an incentive, which he lets develop itself – he literally donates the action the right to self-employment. He prophesies and lets grow out of it. He neither creates the beginning, nor directs to the end – he literally lets it happen.

Triana has written with Body Art not only an extreme-horror-thriller and supernatural splatterpunk-novel, but also has build the bridge between Jesus F. Gonzalez Survivor and Monica O’ Rourke’s & Wrath James Whites’ Poisoning Eros – between the repugnance of reality and the unspeakable of the supernatural.

Many thanks to Blood Bound Books for this blood bound book! 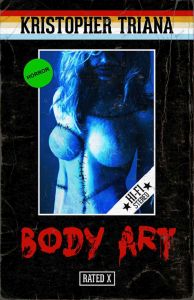