If the bombs dropped…

As life as we know is stopped…

If everything went to hell…

How far would you go to survive?

A family will do anything to survive after a nuclear attack has left their world in ruins. Actions which even surprise them…

No memory. No past. No names.
Father, mother, sister, brother – these are the "names" they reached an agreement.
The family lives barricaded in a house. Reinforce their identity on one picture – their whole past seems to be a picture. No one can remember, what happens, who they are, where they’re from – a nuclear bomb is what they said. But outside doesn´t wait the nuclear winter, but the sun… birds… and these creatures. Mutants, hunters… whatever they are: they’re bringing the death!
Into the house waits the surviving; the price is not payable anymore since a long time. Surviving at all costs.
Survive as a woman.
Survive as a man.
Survive as a human being – whatever that still means – except of drinking… and eating!

Four people without a past in a house, which transforms more and more to a prison and the one question: is out there a future – and the answer, who they are?

Sick B*stards is experienced from the perspective of the brother (son). This ego-perspective offers stylistically the possibility of a more intense experience of the action – and Matthew Shaw knows how to handle it. He doesn’t hesitate, does not allow an acclimatization period, doesn’t let the happenings slowly be effective to the reader, but throws him without warning in the cold floods.
Even the pictures that Shaw spends are obscene, they’re not living ’cause of perversion, but despair. Sometimes I felt remembered for Josh Malerman’s Bird Box.
You are alone. You don’t doubt, but survive; and judge yourself!
The language chances in an absolutely realistic setting between protective sterility and passionate abasement.

The end maybe isn’t that surprising you’ll hope, but you may not forget, that this is just the first of three parts (Part 1: Sick B*stards; Part 2: SickER B*stards; Part 3: SickEST B*stards). And finally the end closes the circle of this first part – but not finishes it.

Sick B*stards is one of the books, which needs to be understood. It’s not about splatter and gore, not sex and violence – Shaw created a kind of psychodrama, a morbid Coming-of-Age-Novel, whichs sick origin rots in the development of an increasingly grotesque self-disclosure.

Every (good) author has its own style: Shaw is "dry". He does not provide dripping fiction, no excessive obscenity or fragile dystopia – he just lets it happen. Less merciless, but just with no emotions, he steers a steam-roller unstoppable onto the reader, but not with the intention to roll over him, but to let him feel the getaway; not to hunt, but to urge with the uncertainty, if there is a possibility to escape – if there is anything like the option to escape or if it’s the last delusion of hope.
Yeah, Shaw is "dry"… 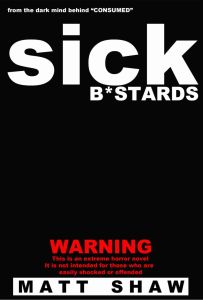