Six-foot-nine and four hundred pounds, hailing from parts unknown, he is the one-man walking gore machine of the Deep South Wrestling Conference, and his name is…

But police captain Phillip Straker isn’t a wrestling fan. The bodies pile up like dirty laundry: sex-obsessed tramps used as playthings by some unspeakable crea­ture. Straker is determined to solve the rash of rape and mutilation murders with trimmings that beggar description. Is it just coin­cidence, or do all the victims have some­thing in common?

Investigative repor­ter Melinda Pierce will do anything to find out, by offering herself up as a sexual spittoon in order to infiltrate the arcane and lust-drenched warrens of the backstage wrest­ling. There in maloderous locker rooms and unsavory motels, she partakes in carnal forays so gross, so downright nasty they’d make Linda Lovelace bend over and puke. All to track down…

This human jugger­naut, this masked rack of guts, muscle and mayhem… Is Goon just a wrestler gone insane? Or is he something hideously worse?

Lee and Pelan – folks, this is just like bolognese and spaghetti: it just belongs together! Or another example, which’s even closer to the topic: "Splatter" and "Punk". It’s a perfect match. Period!
So well… Goon is the first collaboration between this two weirdos – and fortunately it was not the last!

"The Undertaker". "Hulk Hogan". "The ultimate Warrior".
Names that accompanied me in my childhood and jangles my mothers nerves…
I’m talking about wrestling: the number one show-fight!
Strong men, hot women – the gladiators of modern times, wrestlers, know how to excite millions! And Goon is one of these wrestlers …

The plot of Goon is already well described by the blurb:
Sex and violence is mixed with classic horror elements – but it wouldn’t be Edward Lee and John Pelan, if it’d be really that easy…

Goon is kind of… "complex".
Not because it’s literary demanding – I do not really have to go into that, right?
Also not because it would raise the level of sex and violence to a new level – in fact, it’s a more restrained work of these two.
No, what makes Goon so special, is the diverting entertainment, which brings a smile on your lips even days, weeks or months after reading.

For rookies I wouldn’t recommend Goon as the entry to Lee’s world – for that it’s too atypical, too special, of what you can expect from Lee yet. Remind: we’re talking about an early work and finally Lee’s first satire!
Also undiscerning "Lee – Blood – Phat"-readers may enjoy other books from the Godfather – in fact, this is too (and I will not use this word in context with Edward Lee’s literature often) filigree. Goon doesn’t live by blatant stupidity, but the persiflage about itself!
In fact, I recommend Goon to the honest Lee-Fan, who’s aware of the potential of this exceptional writer and reads this work with less expectation than curiosity. In this case you’ll not be disappointed!
But also real Splatterpunk-Heads will have a good time with it, as Lee and Pelan took the risk of remembering for the composition of the genre: Splatter – Punk.

The book doesn’t take itself serious, is also a wrestling fan-fiction parody and already contains those glorious and typical Lee allusions, you’ll find in many of his books (for example: Philip Straker, the name of the police officer in this book, is the synonym, Lee has published his first two novels).

But the really most important thing about Goon is, that a cult figure was born in this book here, who was praised with an own book (Splatterspunk – The Micah Hays Stories, Sideshow Press, 1998) two years later: Micah Hays!

…Goon is lightweight-literature par excellence!
An entertaining pleasure, which’s so likable, because of its informality.
You can like it, you can leave it – it is, what it is: a NC-17-skit, which takes the established blood-masquerade from the Splatterpunk a little bit and offers an idea of the actual diversity of the genre. 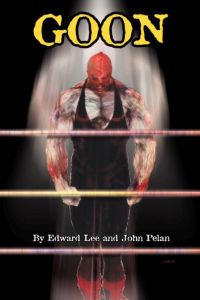