And that’s just the first paragraph!

PFC Micah Hays and Chief Richard Kinion – Laurel and Hardy NC-17!
Eight novelettes about the dream-team of Splatterpunk, to stimulate the imagination of the reader in a very special way – holy Jesus Jiminy Chrast!

Foreword… (2 pages)
What should I tell ya ’bout a primitive foreword….
…except, that you won’t read the two authors here, but Micah Hays; dang it!

The idea to give the foreword to the protagonist is absolutely ingenious – but the implementation simply surpasses everything!

A real prologue: the beginning (of a legend).
The birth of Micah Hays, as each of us has his wettest dreams of!

Cotter’s Field or The scene that started it all… (7 pages)
Shore, Micah Hays knows Cotter’s Field – or how he used to call it "Cotter’s Fuck Hole".
And, shore, he has more than just one story ’bout Cotter’s Field in stock, he has to tell Chief Kinion straightaway…

In fact, this novelette is the origin – or as the title already says: "The scene that started it all…".
This novellete is the chapter from Goon, which was the moment of creation of Micah Hays.
A little piece of history – yes sir!

The Case of the Police Officer’s Cockring and the Piano Player who has no Fingers (22 pages)
The pianists wife of The Crossroads is freaking out! Thank Gawd, Micah knows the way down pat – even if the cock ring disturbs a little bit now…

Well … never trust no one or you’re fucked…
…true words.
A situation in The Crossroads, a (fatal) mistake… and a cockring!

Girls’ Night Out (19 pages)
"Girls just wanna have fun" (Cyndi Lauper: She’s so unusual – Girls just want to have fun) – that Micah Hays is the right address in this case, I guess I don’t need to emphasize explicitly.
Yeah, the gals are a little bit self-interested, but Micah is a pro…

The beginning of this novelette certainly evokes memories of Lee’s novelette The wrong guy (Brain Cheese Buffet, Deadite Press, 2010). But it becomes a fairly classic novelette, with the typical "Hays’n’Kinion-ambience" and a dirty-grinning end.

Sideshow (by John Pelan) (53 pages)
The circus is in town!
And, of course, the sideshow may not be missing. Well, and here we’ve got the problem: it’s possible, that there’s a violation of article 27, sections 15 through 17! Of course, Hays and Kinion have to investigate here…

If I’m reading any kind of novel about a circus, I like to compare it to Will Elliots novel The Pilo Family Circus (ABC Books, 2006).
So you’ll find here also a good mixture of horror and mystery, but in this case it’s enriched with a lot of sex, thriller and violence.
Even the story starts a little bit (to) slow, you’ll find out pretty soon, why Lee loves to work with Pelan.

Refrigerator full of Sperm (by Edward Lee) (120 pages)
A phone call from Doc Willis: his wife, Jeanne, has been kidnapped!
As PFC Hays and Chief Kinion arrive at the crime scene, they do not just find Doc Willis, but meet Captain Dana Majora from INSCOM (U.S. Army Intelligence and Security Command), who’s on a top secret mission…
…and from now on, she’s not alone anymore.

Finally Lee has the chance to runs riot a little bit! In the context of an almost conventional thriller, he wrote an alien-sex-splatter-satire, actually only Edward Lee can, dares and does!
He’s not just speeding up – he’s running crazy! And Micah Hays is literally right in the middle!
UFO: I do not have to explain what the "F" stands for in Micah Hays’ little world, right?

Eperlog (9 pages)
All’s well, that ends well…
The hail! It wouldn’t be Micah Hays, if the end wouldn’t be better!

Splatterspunk – The Micah Hays Stories is a(n) (s)explosion of crackbrained obscenities, an absolutely fun-read especially ’cause of the dirty puns!
Instead of throwing a stupid pre-school posse to the reader, Lee and Pelan created a(n) (seriously) extraordinary satire (that sometimes makes the reader feels with Chief Kinion). But behind all the sexually transmitted diseases, body fluids, and other (even verbal) excrement, there’s always waiting a wink for you.

Instead of an infantile comedy, intended to make an amoeba giggle, you’ll find a superlatived parody of reality – not least because of the fact, Micah Hays is a real person!
Small child pattern, (typically) archaic-masculine behavior, mystery, classical literature, ufology, horror, … – stop at nothing! Catch it, dip it a few times into the primordial slime of obscenity and then lick it clean – holy motherfuckin’ sheeeee-it!

Just to make sure (even it should be clear now): who’s looking for blood, violence and horror (in a more or less conventional way), should steer clear of this book!!
This is simply about the one thing – and if you’re thinking of ordinary sex now, you fuckin’ don’t know PFC Micah Hays – sheeeeeeeeeeeeeee-IT! 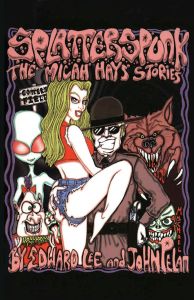