There is a civilization buried deep beneath our own. A place spoken of only in whispers. If you are desperate enough, you will find it. But remember, all knowledge comes at a price.

The bodies were discovered six months after Max Elliot turned in his badge. All that remained of the victims were piles of flayed skin and organs. The bones of each body had been stolen. This tortuous method of execution had only been seen once before, and that case remained unsolved. Confident of a connection between the grizzly murders, the police turn to the one man they believe can help. With the allure of closure to his own personal tragedy, Max Elliot agrees to reinstatement for one last case. But the clues lead the unstable detective down a path he never could have imagined. A mysterious drug, a world beneath our own, sex and violence on an unprecedented level, and creatures as ancient as sin itself.

Follow Max as he looks for answers in THE CITY.

And it began so… "normal":
Max, a former police-officer, whose wife was murdered in most disgusting manner and daughter disappeared without a trace, is consulted on a case of murder: the victims were skinned and gutted… also their bones were removed – just like it happened to his wife …

And then everything takes its course: conjectures and hopes, the journey into the unknown to find answers – in The City…

The City is a city under the city. A sense of sin, in which nothing is impossible, nothing is unpurchasable, and nothing is unthinkable. The last perversion, the first sick mind – here are the nightmares, which were never dared to be dreamed of.
Max searches his daughter here, because he is firmly convinced that she can only be here – was dragged here; by whomever.

As I said, everything started so incredibly "normal". A former police-officer; woman murdered; child kidnapped; guilt; an unknown city that deliberately keeps its existence secret…

…and suddenly you’re not longer in the beginning. Suddenly you’re on the journey with Max, are the journey, are Max but still just the reader, you’re foreign in a repulsive familiarity. And thus normality begins its metamorphosis.

Under the cover of a crime-noir in chinatown in the beginning of the 20th century, you submerge into the last essence of the will of life and unite with the darkness.

You do not suffer with Max, you are his suffering! You can literally feel how to try to flee from his eyes as a tear, taste the desperation that threatens to poison his mind and smell the fear as the faithful brother of determination.
What Mendes has written here is so far away from a clear-cut genre: it is an intangible mixture of (extreme) horror, crime-noir, psycho-thriller and a coming-of-age novel.

The opium-clouds slowly form an independent firmament, under which you begin to develop a kind of co-existence, an existence in existence – a life in The City.
The discomfort distracts more and more to a familiarity as consciousness can not comprehend it, like a delirium you sink further into the never dared nightmares of fear and finally settles in the rotting cradle of despair – the metamorphosis is done; and starts again at the same time…

The City is extreme horror, is psycho-terror, which only gains color in the garb of the supernatural. Mendes doesn’t work with the excesses of violence, but the foundations of the sentience; he doesn’t attack the reader, does not build on shocking repulsiveness or indescribable violence – he just takes the reader.

Mendes takes the reader with an almost eerie matter-of-factness, denies him all of his self-determination, and then simply stabs: once – precisely – briefly. And so he leaves you behind, slowly bleeding out in the foreignness of your own perversion, your own boundlessness, which soon not only welcome you, but has expect you back…

Welcome home… in The City.

Many thanks to Marc Ciccarone from Blood Bound Books for the provision of a review-copy and the possibility to read this masterpiece! 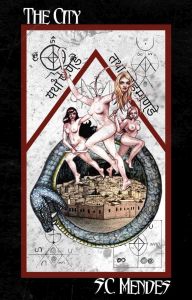